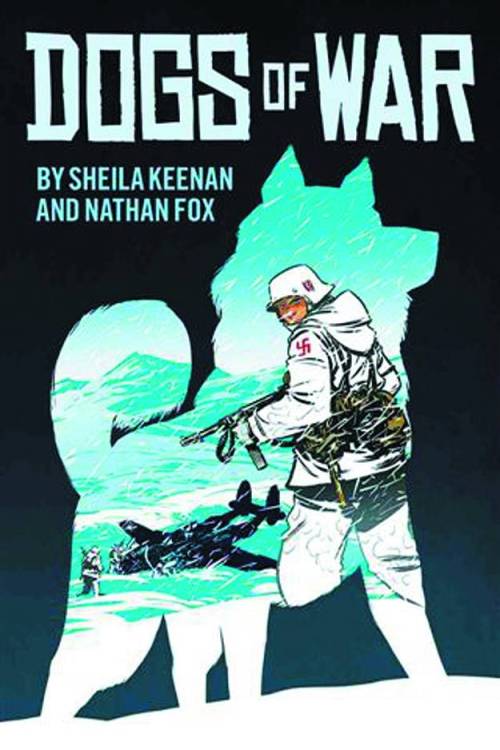 Dogs of War by Sheila Keenan and Nathan Fox is a new book coming out at the end of October.  It collects three comics about dogs in wartime, starting with the trenches of World War I, Greenland in World War II and ending with memories of the Vietnam War.

It’s a good book and has already gotten passed around our household.  Writer Keenan has produced two straight-forward adventure stories and one a bit more melancholy, given that it is set after its war, back home in the States.  Artist Fox does some really solid work and the coloring is great too.

The first story is set in World War I and concerns the adventures of young orphan Marcellinus McDonald and his dog Boots.  McDonald is separated from the Doctor he is working with (and who also adopted McDonald) and he and Boots fall in with a platoon in the trenches.  You get a sense of the nature of this war, and Keenan includes the famous story of the soldiers on both sides venturing into no mans land during Christmas to sing carols together.  It’s a good story, probably my favorite of the three.

The next takes place in World War II on the island of Greenland.  A simple scouting mission turns into a tangle with Nazi spies and a feisty dog named Loki rewards the soldier Cooper with his loyalty.  Another exciting adventure that tells a good story.  It’s much less evocative of World War II simply by being set in Greenland away from any major theatre of the war, but nevertheless it’s an exciting read.

The last story is good but a marked departure from the first two.  Maybe simply because of America’s mixed emotions about the Vietnam War, the creators felt the need to treat it differently?  It is still a good story but it presents a present day encounter between a Vietnam veteran and a young fatherless boy who lives in the same neighborhood.  The vet worked with dogs in the Vietnam War and has a complicated relationship with his memories and with the neighbor boy who has a new dog.  Less of an adventure story than the other two but one that does raise some important questions about the military’s relationships with the dogs they rely on to help fight wars.

Definitely one worth picking up — probably a good read for older grade school kids through middle school.

Note — Scholastic provided a free copy of the book for review purposes.